Independent Variable - The variable you can control and manipulate in some cases.  In other cases, you may not be able to manipulate the independent variable. It may be fixed like color, kind, or time (http://www.ncsu.edu/labwrite/po/independentvar.htm)

Dependent Variable - What you measure in an experiment and what is affected during the experiment.  It "depends" on the independent variable

However, sometimes there is no obvious connection between the variables. In other situations we are interested in how the many variables interact with each other.

There are 4 main types of variables

What a table can tell you

Any graph used to report findings should show

4. When graphing data from lab, make line graphs because they tell you how one thing changes under the influence of some other variable.

5. NEVER connect the dots on your line graph.

To show that you're a clever young scientist, your best bet is to show that you KNOW your data is sometimes lousy. You do this by making a line (or curve) which seems to follow the data as well as possible, without actually connecting the dots. Doing this shows the trend that the data suggests, without depending too much on the noise. As long as your line (or curve) does a pretty good job of following the data, you should be A-OK. 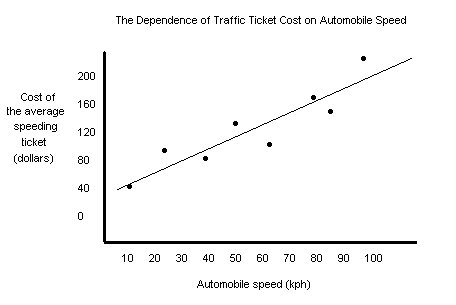 Well, look at it!  It has a title, labeled axes with units and a line of best fit to show the trend of the data.