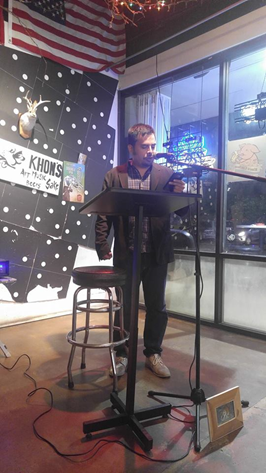 Hugo Esteban Rodríguez is a Mexican-American writer, poet, essayist and educator living in Houston, Texas with his wife and three dogs. He was born and raised in Matamoros, Tamaulipas, Mexico and later in Brownsville, Texas. He considers himself a son of Mexico and the Rio Grande Valley.  His work has appeared in Neon Mariposa, Mathematician Transmission, Marias at Sampaguitas, The Airgonaut, The Acentos Review, Spirit's Tincture, HEART Journal, Picaroon Poetry, and the Texas Poetry Calendar.  He was formerly an assistant editor for Bartleby Snopes; Latinx Features Editor at Rabble Lit; and currently reads slush for Interstellar Flight Press.

His short story, The Ritual, was longlisted for Wigleaf's Top 50 and was nominated by The Airgonaut as part of their slate for the Pushcart Prize and Best Short Fictions in 2016.  On his free time, he enjoys annoying his wife with bad puns; reading and writing short stories and poetry; cooking experiments; listening to podcasts; going to concerts; and supporting the San Antonio Spurs

Interview with the Auther

and an entry on several Wiki pages, notable alumni, writer
expat, exile categorized in the path of least resistance
to the very same labels I now crave

the stereotype of a man bleeding ink stains
in forgotten laundry, absent-minded strands of thought
are fraying leisure (we daydreamed too much)

but Freddy looks on when I leave
and when I come back, impassive in San Benito
a sentinel, and white on green below

points to Brownsville in the South

And our Aztlan, our Zion, Gringolandia, pa’l norte, northbound
crawling through the concrete braids
of U.S. Highways 77 and 83

when I left, I wanted to come back, in songs and letters
and leave the same way: an imprint of home

a river. an island. a daydream in Parker blue
and khaki bags, a breakfast taco

I read to escape

I read Rowling, Clancy, Turtledove and Zinn
as I read Sabina, Sabines and lyrics to Mexican rock
heavy metal and norteña, like now I read Cisneros
and Butcher, Strand and Lorca, Saenz and Abnett

I read to escape

a beat-up Ford and southbound windows facing operating systems that demanded we congregate
in a Sunrise, north into silver screens and and tortas and pizza and chicken

when Freddy played rancheras, he played country and he played Tejano and he played swamp pop
and rock and roll with the Texas Tornados
and Los Super 7

to Freddy and Baldemar Garza Huerta

Anglicized is what's prized, but I took my father's name

And I took my mother’s name, their example
Rodriguez, Castañeda, labor of love, love of labor

to write my own corridos like my grandfather
and represent my Matamoros, my Valley
lo nuestro, lo mio, ours and mine,
the sabal and nopal both drink from the Rio

Call me Anahuac, so close to my baptismal

Like los maestros who nurtured poetry
through song, dance and rebellion

change under the sign of Venus
the delta, a floodplain
and in the skies above, dos aguilas, two eagles
chase the duende, chase the dragon

I crossed during the day through los tomates

A man in blue asks me

“Nada que declarar? Nothing to declare?”

Officer, I declare myself an immigrant, a refugee, an exile, an opportunist

But your Fox News will declare me otherwise, and they will narrate my life

In the style of a nature documentary

Here we have the brown parasite, sapping nutrients from a lenient host

That just allowed this invasion

From Ellis Island to Brownsville, Texas

I declare a land seen through rose-tinted glasses

A prison in South Texas

Where three little boys from Mexico, Guatemala, and El Salvador

Cry out for their missing mother in a song

A corrido about a deadly train and the struggle

Between ranchers and Jackals

And offered them as sacrifices to the sun-god Huitzilopochtli

I declare we are pagans

And grilled grasshoppers from a man at the plaza

Pagans who thrive in suffocating heat and humidity

I declare we are the barbarians at the gates

And build with you, not in spite of you and we want to be loved

Because what is there to fear?

Fear the man with the badge who kills with impunity

Fear the congressman who believes in a government so small

It can fit inside your bedroom, your closet, your uterus

With some vaporru and some caldo de pollo

With a rubber ball and tattered sweaters as goalposts

And fancy themselves champions of the world

Because I do declare we are the children of kings

And swear loyalty to those that call us hermano

And work with us to make things better for everyone

Because I do declare this land is my land

This land is your land

This land is our land